Julie L. Spencer lives in the central Michigan area with her husband and teenage children. She has a very full life managing a conservation district office, writing grant proposals, newsletters, articles, and book reviews. Julie has been writing since she was in junior high, but prior to publishing her first novel, The Cove, her only published work was her master’s thesis. She loves to read and write New Adult Contemporary Clean fiction, is author of the Buxton Peak series, The Cove, and has several more novels and non-fiction projects in the works.

When he meets Megan, a small town college girl at church in a remote part of Michigan, he figures out pretty quickly that she knows nothing about him. So he makes the decision to hide his fame from her.

His plan backfires when Megan finds out who he really is and decides she doesn’t want to live her life in his spotlight, with all the baggage that comes with it. She just wants to live a quiet life in rural Michigan with a normal husband and family.

Can she forgive Ian for his deception (and embarrassing her on live television)? Is she willing to give up her dreams in order to follow his? Or will Ian throw away everything he’s achieved to stay in her life?

Even a rock band as talented as Buxton Peak can come crashing down.

Protecting his bride from cameras and scandals is the least of Ian’s worries. While he is blinded by love, his band is torn apart by distractions, temptations, and drug abuse.

Will Ian stand beside his mates, letting their problems become his problems? Can they pull together as a band? Or will the pressures of stardom rip them apart?

In the beginning, it was all about the music…

Even a rock band as talented as Buxton Peak can’t stay on top forever. When drugs, betrayal, and tragedy rip the band apart, the guys find themselves short one drummer.

Nathanial Jackson plays drums for a small Christian rock band, but his talent exceeds theirs. He’ll never make it out of Nashville sitting behind them.

When the remaining members of Buxton Peak show up at Nathanial’s concert, he knows exactly what they want. A knowing glance and a handshake is all it takes to get him into the recording studio.

But starting over isn’t as easy as they thought. Ian believes his passion will be enough to keep his rock band from falling apart. He didn’t count on Nathanial challenging his leadership.

Can Ian and Nathanial set aside their differences and learn to work together? Can they find a new rhythm and recreate the sound fans expect from Buxton Peak? Or will tempers, pride, and outside pressures keep them from finding their way back to center stage?

This isn’t the end for Buxton Peak; it’s only the beginning… 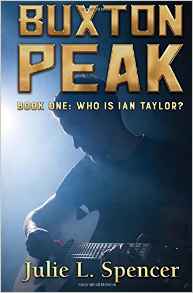 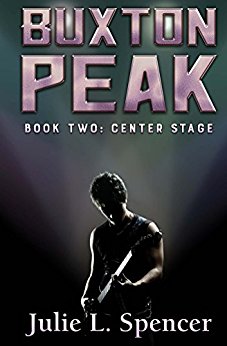 I’ve been sitting on this interview for awhile. (I know, me bad!) But I knew that Buxton Peak 3 was in the works. And now it’s here, and all set in my Kindle to read myself.  What better time is there to learn a bit about the writer who brought Ian and his band to life?

Roxbury Books:  What genre(s) do you write?

Julie:  I write mostly New Adult Clean Contemporary Fiction, most have an underlying Christian theme and a high level of romance (but they don’t follow a typical Romance novel story structure).

Roxbury Books:  That’s what makes them really refreshing to read. What rating would you give the books?

Julie:  Maturity level for most of my stories is PG-13 due to drug references and frank discussions/innuendoes about sex and the importance of waiting until marriage

Roxbury Books: What is your favorite song(s) to listen to while writing?

Julie: While writing the Buxton Peak trilogy, I listened to a lot of One Direction, but now that I’m writing Buxon Peak: The Early Years, I’ve been jamming to 80’s rock songs like Bon Jovi, Aerosmith, and Guns & Roses. I’ve come to the realization that Slash is quite possibly the most talented guitar player who ever lived.

Roxbury Books: What is the first thing you remember writing?

Julie: I wrote my first novel in junior high. It was terrible, but my friends passed the pages around as fast as I could scrawl them into a notebook. I would rip out a page and hand it to the person next to me and keep writing. I’m not sure how I passed seventh grade, or why the teachers didn’t put a stop to it. I just kept writing, and writing, and writing. I threw the manuscript away at the end of the school year. What I wouldn’t give to have those pages back.

Roxbury Books:  At what moment did you feel like you could say, “NOW, I’m an author?”

Julie: I’ve always said that you’re not an author until someone else pays you for your stories. So, the first time I got a commission check, I thought “NOW, I’m an author!”

Roxbury Books: I bet that felt amazing.  I lean towards you are an author the moment you set your heart to it and write.   Do you write using a keyboard, pen and paper, or both?

Julie: I mostly write with a keyboard but I use a lot of sticky notes, too. I also have notebooks that I use to write notes, outlines, diagrams, flow charts and maps. I can type almost as fast as I can think, so I prefer a keyboard. I also have to use an external keyboard because I wear the keys off. My nails are really long and scratch off the letters.

Roxbury Books: I know many writers who cast their stories, so I really want to know the answer to this question. Do any of your character sound or look like famous actors in your head?

Roxbury Books: Do you write/read every single day?

Julie: I’m an avid reader and often read several novels each week. Thanks to my Kindle Ap on my phone, I can read while walking from my desk to the kitchen, from the restroom to the drinking fountain, walking through the grocery store, while doing the dishes, etc. I also write every chance I get, usually every day. I have a full-time job and I’m a wife & mother, so I’m limited in what I can accomplish. If it were up to me, I’d write all day everyday!

Roxbury Books: What is one of your favorite beverages/snacks while writing?

Julie: I’m completely addicted to Diet Coke. That’s all I have to say about that.

Roxbury Books: Do you have any other creative outlets besides writing?

Julie: I am the Administrator of a local conservation district and I’m very involved in watershed management planning, soil erosion control projects, and wildlife habitat restoration. Very strange departure from writing stories about rock stars, but I’m very passionate about the work we do at the conservation district.

Roxbury Books: Who are your three favorite characters in your book(s)?

Julie: I’m oddly in love with my guy characters to the point that my husband should probably be jealous… except that he is my romantic inspiration, and he knows it! Ian Taylor and Kai Burton are my favorite guys in the Buxton Peak series, and Todd Ramsey is my favorite from my novel called The Cove.

Find Julie on the web: